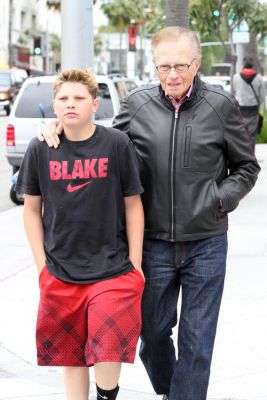 We all know Larry King as the world-renowned TV anchor who kept Americans in-the-know on global happenings for 25 years via his CNN show, Larry King Live.

My Life As A Dad, the popular web series that delves into the lives of celebrity fathers, recently chatted with Larry King about his experience in being a dad to five children, two of which were born almost four decades after his first children.

Larry King’s son Larry, Jr., adopted son Andy, and daughter Chaia were born in the 60′s, a hectic time when his promising and long-withstanding broadcast journalism career took off. In the interview, Larry shares how he thinks his earlier children might view how he fathers his sons Chance (b. 1999) and Cannon (b. 2000) differently now.

“I don’t know if they are hurt by it…they don’t say it,” Larry says. “They all pretty much handle it very well and they love their younger brothers. But I imagine that there is a little resentment. That would be normal, you know, why he wasn’t there for me all the time. It’s the kind of life I led and if I could do a do-over again, I would have spent more time.”

He also discusses how many men don’t understand real love until they have a child. “It’s the first time in your life,” he shares. “You don’t have to love your wife–that’s why there is divorce. You don’t divorce your children. There are things about your children that will annoy you, but the love is spectacular.”

He also shares a special moment he had at one of his son’s baseball games: “Yesterday, my son pitched three scoreless innings for Notre Dame’s scrimmage game. I was sitting in the stands at the beautiful field at Notre Dame. He was pitching and standing on the mound with that regal look…I just looked at him and could almost cry. I flashed back to the day he was born and the day I took him to his first game. And there he is, standing with that regal look. He struck out a guy…that jolt just goes through your heart. He asked me, ‘Do you root for me more than you root for the Dodgers?’ and I said, ‘Of course!’”

And does he have any thoughts about the fatherhood experience?

“Fatherhood is fantastic, fantastic.,” Larry states. “Whatever is second best is a distant second.”